Instead, there are well-planned meals and a specific amount of calories a person on diet should regularly intake. These plans are really worth following, especially since the pounds will not return, as the person on a diet will not experience hunger during the whole process (frequent meals appropriately pre packaged meals).

Bottom Line Up Front: Part of the reason I wanted to sign up for a meal program diet was to avoid having to think and plan each meal. This is a why I much prefer the tailored plans developed by Nutrisystem. That’s why I ultimately lean towards going with Nutrisystem here.

That said, Wonderslim diet is a very similar program. I can see the value of a la carte options, especially if you are on a budget.

Let’s dig in to the full comparison…

Main Difference Between Nutrisystem and Wonderslim

The main differences between Nutrisystem vs Wonderslim are: 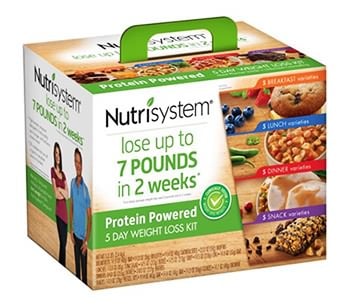 Look, in a perfect world I would recommend everyone just practice some self-control... but sometimes "sticking to a system" is what works best. For clients I work with who "just need a plan", Nutrisystem is one of the plans I recommend.

Choose Your Weight Loss Plan
We earn a commission if you click this link and make a purchase at no additional cost to you.

Nutrisystem vs Wonderslim Summary at a Glance

Diet food fads come and go, and some it turns out, was very ill-conceived. Take the now infamous Grapefruit Diet of the 1970’s, which had dieters eat a grapefruit with every meal–or even replace meals with grapefruit–based on the faulty principle that the citrus contained an enzyme optimized for fat burning.

A decade later, it was the arguably equally infamous Cabbage Diet, which not only lacked essential nutrients but likely left many with upset stomachs.

Nutrisystem and Wonderslim are different thankfully: both are based in more firm footing in terms of sustainable weight loss, and both are connected to a larger, arguably more staying trend of meal plans being connected to flexible and full systems that are meant to help you manage your diet from meal to meal.

But when compared side by side, is Nutrisystem or Wonderslim the better bet?

If you’re overweight like over half of Americans and looking to shed some weight for better health overall the word dieting may bring up mixed emotions.

But dieting in of itself is neither inherently good or bad-its all about context: how it is done, and for what purpose.

Ask yourself the following questions:

Why should I consider a commercial diet plan?

Starting a commercial diet plan takes some thought before you get too invested. Not only do diet commercial plans of course cost money, but they will likely alter the way you eat–and while that is often the point of diets in of themselves, a full system plan like Nutrisystem and Wonderslim products, offering products and supplements meant to be consumed alongside or in place of meals and snacks, needs to be something that makes sense for you.

While experts agree that an energy deficit, and combining both diet and exercise, is the key principle to lasting weight loss, a commercial diet system like Nutrisystem and Wonderslim offers a plan with recipes and specific products so you won’t be scrambling to figure out what to eat.

You should consider a commercial plan like Nutrisystem or Wonderslim if:

As you might guess, commercial plans are not for everyone, so it’s important to be honest with yourself and aware of your lifestyle and preferences to figure out what works best for you. Commercial diets can also become expensive if you’re not aware of costs, and it can also be hard to estimate costs upfront. But commercial diets, if you stay committed to them, if they are nutritionally sound, and if they are catered to your needs, can be a great way to jumpstart weight loss, especially if you’re feeling lost.

If your skeptical of diet plans like Nutrisystem and Wonderslim, the best way to see if they are worth the hype is to read on.

What to look for in Nutrisystem or Wonderslim?

First, understand that there are different types of commercial diets. Some diets are linked to apps, which emphasize overall balanced diets and exercise, and connect you with a larger dieting community or even a personal coach, as is the case with something like Weight Watchers.

Nutrisystem and Wonderslim are a little different: both are more of a full-service meal system and focus on providing specific products to create a meal plan without much planning on your part. Instead of an emphasis on a larger community, both Nutrisystem and Wonderslim’s main intent is to provide a self-directed plan, with meal kits and snacks meant to suit hectic schedules.

If you’re self-driven but also cramped for time and maybe a bit overwhelmed when it comes to prepping meals and snacks, a plan like Nutrisystem or Wonderslim may suit you more.

Because such plans are focused on the actual products they’re selling, the set of criteria is a bit different than what you’d look for in a mobile app meal plan.

Be on the lookout for the following factors:

In addition to the products themselves, you’ll also want to make sure that the company offers customer service, a generous refund policy, and overall transparency. Looking at customer reviews, finally, will give you an idea of how well received the product actually is; never rely on testimonials alone to determine if something is a proper meal system.

How does Nutrisystem compare to Wonderslim? Since both Nutrisystem and Wonderslim are meal plan systems that are fairly well known, we thought it would make sense to conduct an in-depth look at both of them. We’ll look at a number of factors and see how both compare to determine which plan is the better bet for long term success.

First, let’s take a look at the overall system of products Nutrisystem and Wonderslim offer.

Compared, the two systems have different focuses. Nutrisystem has more to provide in terms of pre-made meals, while Wonderslim specializes in protein shakes, though at the highest levels of membership overlap.

Which method is better?

Well, there’s some debate on that. Both provide convenience, though protein shakes may be even more portable. Since both methods are portion controlled, what it comes down to is if protein meal replacement shakes or meals are best.

The only catch is that a diet heavy in protein shakes doesn’t teach you to eat long term the way seeing balanced meals does–which is why, perhaps, Wonderslim provides guides on exercise and healthy eating.

Because how Wonderslim and Nutrisystem have different systems, the way you order and what you order differs.

In terms of overall value, Wonderslim subscriptions costs less and also provides vitamins as well as support guides–but it’s most worth it at the highest level. While Wonderslim is a bit cheaper on paper and also provides a greater variety of plans, it’s not until you get to premium plans that you also can get normal food added to the mix.

Certainly, there is less variety. All things considered, Wonderslim is the cheaper option for subscriptions, but if you want to make sure you have a large selection of foods you enjoy, Nutrisystem has more to offer.

Both Nutrisystem and Wonderslim offer, at different levels, the ability to customize and switch out for items you like. Wonderslim also offers an a la carte option at discounted prices available to subscribers, while Nutrisystem offers a wide assortment of meals, snacks and desserts, the higher the membership level. But Nutrisystem, unlike Wonderslim, also caters to dietary guidelines for Americans through special plans, with  Men’s, Women’s, Vegetarian, and Diabetic Plans.

When it comes down to it, what do Wonderslim and Nutrisystem products deliver in terms of overall nutrition?

Overall, Nutrisystem offers more variety and essential nutrients if you are relying on their system alone. But that isn’t to say it’s superior to Wonderslim–it depends on how you use it.

If you plan on relying solely on a diet plan system, you’re better off turning to Nutrisystem.

Wonderslim, on the other hand, can be a great option for someone who wants to add their own food but maybe replace a meal here or there. That said, while protein shakes may be very helpful for initial weight loss, it’s also critical you learn healthy eating habits because you should eventually transition to whole food meals. Though vitamins and supplements are a nice touch, the shakes cannot replace real produce. Both plans are low sugar and contain little in terms of artificial ingredients.

Not everyone, of course, wants to follow a subscription plan. Wonderslim allows you to buy products individually; Nutrisystem does not. If you simply wat products to supplement your diet plan, Wonderslim is the better bet.

When it seems difficult to distinguish between two diet plans, customer reviews are another great thing to consider. Look outside of internal testimonials to see how customers really feel about the dieting systems and products.

Nutrisystem vs Wonderslim Diet – Which Is a Better Option?

Of the many reviews we’ve completed, this was a close one.

Both offer ways to speed weight loss and provide balanced nutrition, and for the most part, customers seemed pleased with the taste of the products. When looking at the overall pros and cons, here’s our recommendation:

I wanted to send you one very little word in order to thank you over again for the great thoughts you've documented on this page. This has been certainly seriously generous with you to present unhampered what exactly a lot of folks could have advertised for an e book in making some dough for themselves, mostly considering that you might have done it if you decided. These ideas in addition acted to provide a fantastic way to fully grasp other people online have the same fervor the same as my very own to understand significantly more with regard to this issue. I'm sure there are some more pleasurable periods in the future for individuals who looked over your blog post.

Why users still use to read news papers when in this technological world the whole thing is available on web?|

This design is steller! You obviously know how to keep a reader entertained. Between your wit and your videos, I was almost moved to start my own blog (well, almost...HaHa!) Fantastic job. I really loved what you had to say, and more than that, how you presented it. Too cool!|