Menu
Home
Protein
The Protein Packed Pizza Crust That Will Make You Happy!

Finally! Pizza doesn’t have to be a cheat day meal!

Being a busy mom calls for a lot of things. I have to be in a million places within such a short time. Personally, I love cooking and trying out different recipes. The fact that I am busy means that I lack ample time to try new things when it comes to recipes. However, when I get time, I make sure I use it to do what I love best — being adventurous with recipes.

I think you’d love the following protein powder recipe which I tried a couple of days ago.

Are you tired of sipping the same bland tasting and boring protein shakes? If yes, then try the following sumptuous protein powder recipe that brings with it fresh ingredients and delicious flavor:

1. Preheat your oven to 375 degrees. Mix all the dry ingredients until blended. Add the eggs and mix them until excellently combines. Next, add some boiling water and then mix until the dough thickens and begins to stick to the beaters.

Next, place the ball on top of greased baking sheet. After that, spray just a piece of parchment with oil. Place it to the dough in order to help spread without necessarily sticking. With your hands or rolling pin, spread the dough to a sixteen inch round. The dough will raise roughly two to three times its size. Therefore, ensure the thickness is a third of the final pizza you desire

2. After placing in oven, bake for roughly 25 minutes. Remove the crust from your oven and then brush with coconut oil butter. Return to oven. Broil for approximately 3-8 minutes or the crust is crisp. Begin the broil by having it flipped over in order to crisp the bottom. Next, flip it over and then broil the top. Add some topping and then broil for more 5-10 minutes until the cheese melts and begins to turn brown. 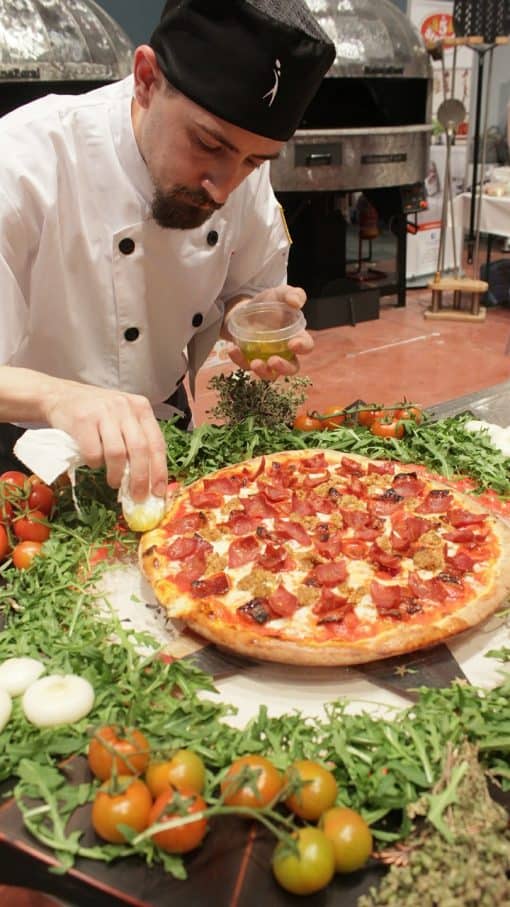