Whey protein supplements might just be the most popular supplement consumed. Together with multivitamins and fish oil, it is a ‘staple’ supplement that even the most casual fitness enthusiasts would likely have consumed. Because of this popularity, there must be dozens of whey protein brands on the market, each attempting to differentiate itself in what is largely an undifferentiated product.

In today’s review, we will be looking at the whey protein offering of a relatively unknown supplements company – Mammoth Supplements. This isn’t actually a new company; it was started in 1987, but it is Canadian-based and appears to mostly cater to the local Canadian market. So unless you are Canadian, there’s a good chance you’ve never heard of this company before.

But unknown doesn’t necessarily mean low quality. In today’s review, we will give you an in-depth look at what goes inside Mammoth Whey. By the end of the review, you will know whether or not this is a quality whey protein supplement and whether it is worth spending your hard-earned money on (or switching from your current whey protein brand).

Mammoth Whey Review: Is This Little Known Brand Worth Your Money?

Let’s begin by looking at what each serving of Mammoth Whey contains.

At 150 calories per serving, Mammoth Whey is definitely on the higher end of the caloric scale compared to most whey protein powders on the market today. While protein and fat content per serving is about the standard by comparison (we would actually put its protein content at slightly above average), its carbohydrate content is quite high.

So right off the bat, you know that if you are looking for a low-calorie and low-carb protein powder (for example if you are on a calorie-restricted diet), then Mammoth Whey is likely not for you. Now let’s take a look at where each macronutrient comes from. 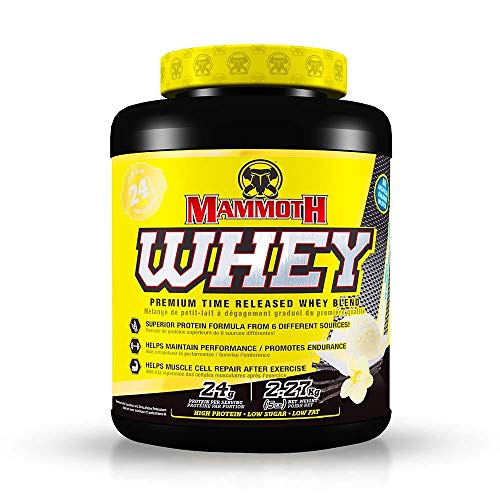 Buy at Amazon.com
We earn a commission if you click this link and make a purchase at no additional cost to you.

One look at the label and it’s clear how Mammoth Whey is attempting to differentiate itself from its competitors. Instead of adding other ingredients to stand out (such as creatine, quite a common addition), Mammoth Whey focuses on standing out through the protein content itself. To that end, Mammoth Whey’s protein blend comprises SIX different types of protein!

Let’s look at each of these types below and see how they differ.

Despite the higher lactose content (which might be a negative for those with digestive issues or who are lactose intolerant), whey protein concentrate does have a higher amount of growth factors (TGF-1, TFG-2, and IGF-1). A quality whey protein concentrate will also have higher phospholipids, bioactive lipids, immunoglobulins, and lactoferrin (shown to possibly lower risk of cancer).

Whey protein is made from a byproduct of the cheese manufacturing process. Milk protein isolate, on the other hand, is made directly from milk. Milk naturally consists of about 80% casein and 20% whey; hence the protein in a milk protein isolate also reflects this ratio.

Being an isolate, most of the lactose has been removed; however, it still has a lactose content of about one to two percent. The protein content is high at about 90%.

Manufacturers use milk protein isolate as it can be cheaper compared to whey (since they don’t have to separate the casein and whey). For the end-user, keep in mind that as casein is a much slower-acting protein compared to whey, and with milk protein being 80% casein, that this will be a mostly slow-release protein.

Hydrolyzed whey takes things a step further than isolates. A process known as ‘enzymatic hydrolysis’ breaks down the bonds linking the amino acids. The result is a protein that is even faster digesting and absorbed compared to whey protein concentrates or isolates.

Hydrolyzed whey is the most expensive form of whey, and many question whether the benefit of faster digestion is worth the cost, especially considering that normal whey protein is already fast digesting.

Casein protein is the slow absorbing cousin of whey protein, and is sometimes called the ‘bedtime protein’. Many people consume casein before bed so the protein is slowly released into their system as they sleep (these people can’t bear the thought of going 8 hours without protein). The reason micellar casein is slower absorbing is because it forms ‘clumps’ in the digestive system.

Micellar casein is a complete source of amino acids; just like whey, and is also about 90% protein. Casein also contains various beneficial bioactive peptides such as the AlphaS-1 peptide and the c12 peptide.

These peptides have been shown in studies to be able to have an anti-stress effect – resulting in lower blood pressure and cortisol (the stress hormone) levels. While micellar casein does have some lactose, it is not nearly as much as that of whey.

Mammoth Whey’s protein blend contains a great mix of whey and casein that will give you both fast-digesting whey and slower digesting casein. Even among the whey and casein mixes, there are variants in digestion speed.

However, because the manufacturer does not release the amount of protein in each individual ingredient, it is entirely possible that the cheaper variants (whey protein concentrate, milk protein isolate) make up the majority of the blend. Without independent lab testing or information from the manufacturer, it’s impossible to tell.

However, assuming that each type of protein is equally represented, we have to give two thumbs up to this protein blend. With such a combination, Mammoth Whey can be consumed at any time of the day. Lactose content is likely to be lower compared to a pure whey protein concentrate but higher compared to a whey protein isolate.

If you know you have lactose intolerance issues, you might want to try sampling this product first. Also, if you have milk allergies, don’t consume this product.

Looking at Mammoth Whey’s ingredients list, it looks like the carbohydrates come from four main sources: maltodextrin, polydextrose, coconut creamer, and the protein blend discussed above.

Maltodextrin is a cheap source of carbs that are found in many supplements (because it’s cheap). We don’t like it. First, it has an extremely high glycemic index value of 85 to 105 (100 is pure glucose). This leads to blood sugar spikes. Second, it has also been linked with negative changes in the composition of gut bacteria.

Polydextrose, while classified as a carbohydrate, is actually a soluble fiber, meaning that it does not have any net carbs. It is a common ingredient in low carb and low sugar recipes as it has been shown to have a positive effect on satiety.

It will not cause any spike in blood sugar levels and also functions as a prebiotic (meaning it will promote the growth of healthy gut bacteria). The coconut creamer which partly consists of corn syrup solids (dextrose sugar) contributes to the sugar content. Finally, a small number of carbohydrates are also incidental as a result of the protein blend.

At 3g of fat per serving, fat provides almost the same caloric contribution as the carbohydrates, at about 19% of total calories. The fat in Mammoth Whey comes from the coconut creamer mentioned above, plus also incidentally from the protein blend.

The fat from the coconut creamer comes mainly from its coconut oil component and provides a little bit of medium-chain triglycerides, which can have short-term benefits for your metabolism. That said, the addition of coconut creamer appears to be mostly for the flavor aspect, which we will look at next.

Mammoth Whey is currently only available in two flavors: Rich Chocolate and Vanilla Ice Cream. The consensus is that both flavor and mixability for Mammoth Whey are good, with the vast majority of users really enjoying both flavors and finding that the product mixing very well.

While the lack of flavor options could be construed to be a slight negative, let’s face it, if two flavors are good, how many flavors do you really need?

Like most protein supplements, Mammoth Whey uses sucralose and acesulfame potassium as sweeteners. What we like is that they are the only company we have seen so far that actually discloses the amount of these ingredients on their label (50mg each per serving).

Given how similar most whey protein products are, value for money might be one of the biggest, if not the biggest factor in choosing one product over another. At present, Mammoth Whey does not sell Mammoth Whey directly through its website, instead only offering only a ‘Store Locator’ function. Hence, we are using the prices available through Amazon each serving will cost you $0.56.

At this price per serving, Mammoth Whey is EXCELLENT value for money. Our own analysis shows that most of the top whey protein brands have a price to serving in the $0.75 to $0.95 range. However, we should note that the Amazon prices were not from Mammoth Supplements itself but rather through a reseller.

Hence, this price might change in the future. Just something to keep in mind; but at present, Mammoth Whey is a fantastic value. Click here if you are interested in more protein options, including the best one for you!

We rate Mammoth Whey as a quality protein that delivers an awesome bang for your buck. Typically, whey protein manufacturers who use a protein blend use it as a justification to charge a premium. Not so with Mammoth Whey (although we admit it does raise questions as to how weighted their blend is toward the cheaper protein components).

With a combination of slow, medium, and fast-digesting protein at this price, plus good flavor and mixability, and this is a steal. Further, the manufacturer explicitly states that it does not use amino spiking in Mammoth Whey, another bonus.

Buy at Amazon.com
We earn a commission if you click this link and make a purchase at no additional cost to you.

Amino spiking is the practice of using cheap amino acids in the product to increase the protein content. Lawsuits have been filed over this. Read more about this unethical practice here.

This is not to say that Mammoth Whey is without its drawbacks. Its carbohydrate content is a little high and we don’t like the use of maltodextrin. The sugar content from corn syrup solids, while better than high fructose corn syrup, is still not great. However overall this is a good product that over-delivers on the price you pay.