Compared to the traditional American diet that is far too high in unhealthy fats, low-quality protein, sugars and a lack of whole product, the vegan diet is a huge improvement. However, jumping into veganism shouldn’t be taken lightly. While a diet consisting of only grains, fruit and vegetables seems complete, it truly isn’t as humans were designed to be omnivores.

Since vegans aren’t consuming animal products it’s extremely easy for nutrient deficiencies to occur. A vegetarian diet may also need to supplement some of the core vitamins and nutrients, so pay attention even if you aren’t strictly vegan!

The 4 main vitamin or mineral deficiencies that can occur are:

Nutritional deficiencies can cause very serious health problems so it’s important to take preventive measures. Because the vegan diet is excluding one very large food group, it’s imperative to take supplements to ensure you are getting the vitamins, minerals and other nutrients you need to maintain optimal health.

Carefully reviewing your diet and focusing on certain plants, fruits, vegetables, or grains is important but most health authorities recommended vegans also take a multivitamin at a minimum.

If you’re new to the vegan lifestyle or are concerned you may not be getting the proper vitamins, here are 3 different vegan-friendly multivitamins to try out. 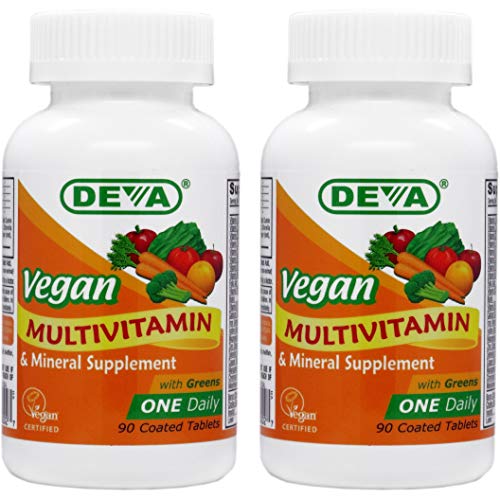 Deva Nutrition produces only 100% vegan supplements and is one of the major nutritional companies registered with the Vegan Society organization. Their Vegan Multivitamin and Mineral Supplement goes above and beyond the quality expected in most vitamin blend.

This multivitamin is enriched with greens, vegetable powders, and herbs to ensure maximum nutrition is delivered. These additives include spirulina, alfalfa, broccoli, cinnamon, dandelion, rose hips, ginger, and spinach, just to name a few.

It even contains 400 mcg of Folic Acid, which can be a great addition to any vegan diet.

The Vegan Multivitamin has all of the essential vitamins and mineral needed at 100% minimum of their daily value, with the majority being higher. Since B-12 deficiencies are the biggest worry for a vegan, Deva included 100 mcg of B-12 per serving. This tablet also has 18mg of iron. It comes in a coated tablet that is easy to swallow. This multivitamin does have a very light “green” flavor as this coating is chlorophyll.

Deva sells this product in 90 tablet bottles, so one bottle will supply you for about 3 months. It also contains 100 mg of calcium, which is a good thing if you say no to all forms of dairy!

Vitacost is a well-known supplement brand and retailer. Despite their excellent, competitive prices of their supplements, Vitacost has very high standards for their nutrient-rich products and is a very reputable company to purchase from. While you can find a range of different vegan multivitamins on their website, their own Vitacost Simply Vegan Multivitamin is an excellent choice.

This multivitamin is enriched with green superfoods and digestive enzymes. The Simply Vegan Multivitamin has 33 essential vitamins and mineral, including all the major ones vegans are prone to becoming deficient in.

This particular tablet is iron-free, so is ideal for men, post-menopausal women or women that already take with a separate iron supplement. It has 100 mcg of B-12, which is 1,667% of the recommended DV. These pills contain added spirulina and chlorella, making them a good source for chlorophyll and iodine.

The added digestive enzymes is something many vegan multivitamins lack, but can be very useful for those with sensitive stomachs. Some people, vegan or not, find that multivitamins can make them feel a little queasy, especially on an empty stomach. These enzymes help prevent this problem and also help the digestive system more efficiently absorb this multivitamin.

Vitacost sells this multivitamin in a 60 tablet bottle, with the recommendation for adults to only take one daily with food unless otherwise directed by a doctor. 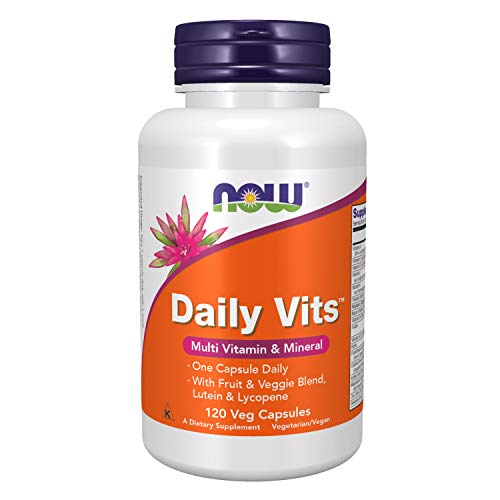 A great multivitamin option for those that are on a tight budget is NOW Food’s Daily Vits. While not sold only for vegans, this multivitamin is vegan-friendly. It comes in a huge 250 capsule bottle, for an excellent price of about $30 (For the latest prices and discounts, check here) depending on retailer.

NOW Foods is a more economically-priced brand but this multivitamin has all the major essential vitamins and minerals you need.

This multivitamin has about 100% DV on all of the major vitamins and minerals vegans need. While this may not be as impressive as the numbers on other brands, it will still be perfectly adequate if you already eat a vegan diet that focuses on preventing deficiencies. For B-12 is has mcg which is 100% of the recommended daily value. Iron comes in at 50% DV, with iodine at 100% and vitamin D at 400 IUs.

The Daily Vits multivitamin is really useful when used in combination with other supplements. For example, if you already take extra vitamin D or B-12, you probably don’t need the super high content in other multivitamins like Deva’s. In that case you can save money and still get everything you need by using Daily Vits instead.

Whether you are a strict vegan or just implement a vegetarian diet into your life, it can be tough to get all the nutrients you require. The vegan lifestyle is arguably one of the healthiest, but only when special attention is paid to diet. Too many vegans make the mistake of assuming they are healthy and getting everything they need simply because they eat a lot of produce and don’t eat animal products. This simply isn’t true.

Whether you’re just starting out vegan or have been eating vegan for years, it’s a good idea to regularly see your doctor and get bloodwork done to ensure you aren’t suffering from a deficiency.

An ounce of prevention is worth a pound of cure when it comes to any new diet. The first step towards better health as a vegan is to begin taking a multivitamin, such as the 3 featured here so you can get your daily nutrients in!

I intended to send you one tiny note to finally thank you again for these pleasing tips you have discussed at this time. It's really remarkably generous of you to grant unhampered precisely what a number of people could have marketed as an ebook to generate some profit for their own end, chiefly since you could have done it in the event you decided. The smart ideas in addition acted as a good way to recognize that someone else have a similar dream just like my own to know the truth great deal more in regard to this matter. I'm certain there are numerous more pleasant moments in the future for many who read through your site.

I wanted to compose you this little observation so as to thank you as before with your wonderful thoughts you have documented in this article. This has been quite surprisingly open-handed with you to allow openly what many people might have supplied for an ebook to earn some dough for their own end, even more so since you could possibly have done it in the event you decided. Those good tips also worked to become a good way to understand that many people have the identical keenness similar to my personal own to see way more when considering this condition. I believe there are many more fun sessions in the future for those who look into your blog.